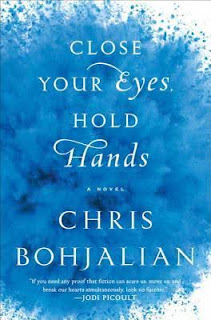 Books about surviving a cataclysm are of interest to me. Also ever since Dad taught my brothers and me about nuclear energy and energy plants I have worried about the danger. The first line on the first page reading, “I built an igloo against the cold out of black plastic trash bags filled with wet leaves,” was my hook.

The voice is that of 16 year-old Emily Shepard. Her dad is the chief engineer of a Vermont nuclear power plant and her mother in charge of communications. Both parents are raging alcoholics and very unhappy people. Though Emily is very bright and does love her family, home, and pet dearly, she acts out both at home and at school and appears to have behavioral problems even before the disaster. When there is a terrible explosion at the plant and thousands are immediately evacuated Emily is thrown into the world orphaned, homeless, powerless, with no money and no idea of where to turn. Not only are both of her parents killed at the plant, but the news media and and most people think it was Mr. Shepard who was responsible for the catastrophe. Emily can never go home to the contaminated area even leaving behind her dog, Maggie. The heartbreak in the book of Emily is almost tangible. Bohjalian makes the reader feel her anger, frustration, and hopelessness, but also her determination and resourcefulness.

Because of the rabid animosity Emily detects towards her and her family she decides to flee the social workers who are trying to help. She ends up in nearby Burlington surviving by her wits, stealing, hanging with drug users, visiting shelters, and inventing a new identity. She is also cutting herself and having sex for money at truck stops. She is an angry young woman and the harsh language and graphic sexual encounters show that.

Just when it seems like there is no way for Emily to make it out of the cesspool of the dark side of Burlington there is a change. Bolstered by a friendship, her love for poetry especially that of Emily Dickinson, and her determination to protect another younger runaway, Cameron she rises to the occasion. As she spends weeks doing what she has to do to protect, feed, and shelter Cameron and herself, Emily begins to realize she has no way to escape forever. Not from danger, her grief, or her past, and she cannot run endlessly. When Cameron becomes seriously ill she realizes she can no longer keep him safe.


There were so many times that my frustration for and with Emily actually made me a bit mad. I did not care for her endless use of the “F” bomb or her flippant use of sex to get what she needed but then again I am not an expert in working with troubled youth. Why wouldn't such a child in that situation ask or seek help eventually? There are pretty complicated issues in this book, and if you can't handle thinking about how troubled runaways survive it is not for you. But if you want an edgy book to make you worry and think and maybe even perhaps gain some empathy for the homeless, pick it up at your local library for an afternoon read.
Posted by Rebecca at 12:19 PM