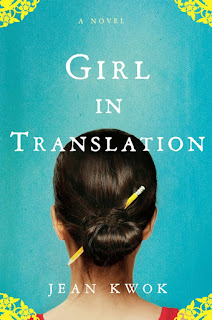 Bildungsroman anyone? Well I don't see or here that literary term used very much except in the library cataloging circles, but that is what Girl in Translation is, or in other words a coming-of-age story where psychological character and moral growth is important. I enjoy a good bildungsroman very much whether it is of another culture altogether like Amy Tan's novels of Chinese immigrants or of American subcultures like the Greek-Americans, or African-Americans.

Girl in Translation is written in first person from the perspective of an adolescent from Hong Kong immigrating with her mother to the United States. Kimberly Chang is a middle school age girl who desperately wants to do well and fit in at school. Kim speaks and reads only a little English and also needs to work. She and her mother have arrived with little money.

Mrs. Chang's sister and her husband have helped pay for Mrs. Chang's medical bills (she has tuberculosis), arranged for green cards, and made their living arrangements in NYC. Kim and her mother are much indebted to their relatives. However, they end up in a heatless squalid apartment. Kimberly works long hours for very little money. The reader can see how easy it is for immigrants to get into this catch-22 of never being able to get out of their poverty. Once here they have so few options and very little choice. But Kim is resilient and dedicated to bettering their situation. The author illustrates through the story the sense of duty and obligation to family and to honor that is so prevalent in the Chinese culture.

As a reader of little experience with Chinese people I enjoyed how Kimberly would think about the Chinese ways and ideals and then relate them to how Americans think and feel. What a great reminder to a reader of how different cultures are thus making it important not to judge always using our own perspective. When Kimberly struggled because of language barriers or educators would make assumptions about her abilities to do homework because she did not have the simplest supplies my heart broke. When her school friend assumes Kimberly is lying about her job because she is sure that kids in America don't work in factories I had to think about how easy it probably is to have illegal factories in big cities that will employ immigrant children.


When I read books like this and those of Amy Tan, Firooza Dumas, Ishmael Bea, and Julia Alvarez I understand better how difficult it must be to leave everything you know and try to assimilate into a totally different culture. I do not think I have what it takes to learn a new language while trying to get an education, work, and take care of a family. What must it be like to not understand most of what goes on around you when you are trying to survive and dig your way our of poverty? What courage. I think I am going to go reread Funny in Farsi.
Posted by Rebecca at 3:17 PM