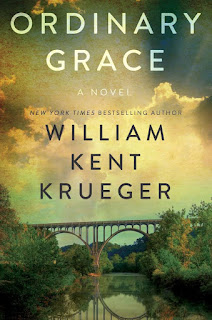 Ordinary Grace is a book about unexpected grace breaking through the human condition of debilitating grief. Frank Drum is telling the story of the summer of 1961 when he was 13 trying to make sense of his world. Frank's father is a Methodist minister, his mother is the music director not only for the churches but for community events. New Bremen seems to be almost Mayberry like with kids playing in the neighborhoods, sodas at the local drug store, and everyone on good terms with the policemen. Then death arrives to the small town in Minnesota. Four deaths in quick succession. Deaths which threaten to tear apart Frank's family and shatter the idyll of the town.

Besides death, other themes running through this book are, secrets, prejudice, fear, sacrifice, and redemption. Frank's dad has a secret from the Korean War so terrible that it changed his career plans from being a lawyer to the ministry. Frank's brother Jake keeps secrets about things he sees and knows about the deaths while his sister Ariel keeps a life-changing secret from her parents. Ariel's boyfriend keeps a secret so dark he hates himself. Emil Brandt the resident celebrity and recluse keeps the darkest secrets of all.

Xenophobia and racial prejudices create a rift between families of New Bremen and between the community and a Native American family. Reverend Drum's persona is one of calmness and caring. When disaster and grief threaten the town and specifically his own family he still turns to his faith and helps family, friends, and neighbors to keep calm and not overreact. He steps in to try to diffuse hatred and prejudice when it erupts. He is stoic in demanding that all the facts be in before passing judgment.

I found this to be a very satisfying one-day read. The characters were believable, and likeable. Mrs. Drum has a hard time being a preacher's wife. College educated with social aspirations she feels unsatisfied and perhaps cheated since she thought she was marrying a lawyer not a clergyman. Reverend Drum is what we all want for a preacher. He is also college educated, unassuming, kind, nonjudgmental, and caring. The adolescent interactions ring true and the mysteries believable. This book comes highly recommended for those of you who like mystery, nostalgia, and an easy read.

Once I finished this book I went to read the author's blog where I found this quotation about libraries,

“Libraries are nothing less than the archives of our culture. These are the places that house the books that guide us to an understanding of who we were and where we came from, help us make sense of who we are now, and maybe point the way to who we might become. When our libraries and librarians are gone, with them goes everything we are as a people. Free and open access to knowledge is an essential right in a democracy. Keeping our libraries alive and vital is as important to our freedom as anything spelled out in our Constitution.”

Of course I know this to be true and I love it being so eloquently stated.
Posted by Rebecca at 3:11 PM