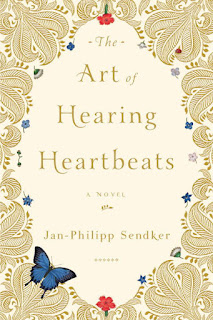 Beautiful cover on a beautifully written book which I found at Half-priced Books in Fort Wayne. The cover art is very elegant and even though mine is a paperback it is a quality one and a joy to hold and read. I can't say enough about the rich writing style of this German writer and this novel.

In NYC a prominent lawyer leaves for a business trip and never returns. Four years later his family finds a love letter he wrote to a woman named Mi Mi in Burma where he grew up, and which he never mailed. His daughter Julia, also a successful lawyer but with a troubled heart, decides to go to Kalaw, Myanmar to investigate. Possibly her father went there and perhaps he might still be there.

Thus begins an unusual and rich journey for Julia Win and for the reader of this multilayered novel. When Julia gets to Kalaw she encounters an unusual and mystical old man named U Ba. U Ba promises to tell her the story of her father’s life before opportunities facilitated his leaving for New York where eventually he met and married her mother.

The story U Ba tells has that ethereal quality of a fairytale unraveling slowly and mysteriously. As a child Julia's father, Tin Win was born and grew up in a village ruled much by superstition and religion. He was abandoned by his mother, who was told by an astrologer that he was “cursed.” Tin Win is taken in by his kindly aunt who loves him dearly. However, when he is plagued by a mysterious illness and gradually goes blind his home becomes the local Buddhist monastery. The monks teach Tin Win how to tap into the wisdom of the heart and to use hearing and his other senses to compensate for his blindness. His heightened sense of hearing escalates until he can, almost magically, hear and interpret heartbeats. Thus it is that he hears Mi Mi's heartbeat. She was born with crippled feet and is also much of an outcast in their village. The two become friends and then as teens lovers.


The love story of Tin Win and Mi Mi is revealed slowly and beautifully. They almost become as one when circumstances occur offering Tin Win opportunities he cannot deny but which separate the lovers. In New York, Tin Win never revealed his past life to his American wife or his children. The writing is so eloquent that as the reader I almost could hear my own heartbeat while learning with Julia the rich and multilayered story of Tin Win. This book will make your heart ache, sometimes with pleasure and sometimes with pain. I do not read what is called “romance novels” and this is not one of those at all. The romance feels real and poignant. For sure I will keep a copy in my library.
Posted by Rebecca at 8:35 AM