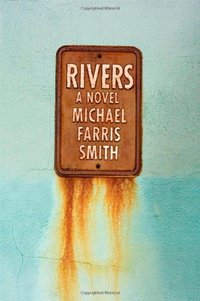 Water. A lot of it everywhere and every day it rains more. Climate shift has continued for years and now the lower half of the country is “lost” to continuous hurricanes, tornadoes, and deluge. The federal government has tried and failed to rebuild and help people living in the South so a line of demarkation has been drawn across the middle of the country east to west 90 miles above the gulf coast. Anyone living below the line must fend for themselves. Lawlessness, murder, gang warfare, pirating, you name it and it goes on below the line. A dreary picture the author paints here for sure in this post-apocalyptic thriller.

If reading a book can make you feel wet, slimy and dirty this one would be it. Cohen is the protagonist and we find him living below the line in the quickly molding disintegrating home where he once was happy with his wife Eliza. She has died along with their unborn baby. It was not clear to me if he had stayed after the evacuation of the South because of grief or some sense of rebellion but so far Cohen is surviving on his own with his Jeep, his dog, and a horse getting supplies from a traveling trader/scavenger, Charlie. Charlie is a previous “survivalist” who always thought the world as we know it would end and like the preppers on TV today he actually seems happy being the local hero-type, scavenging, hunting, and trading.

Then Cohen is robbed, beaten, and left for dead by two young scavengers he sets out to vindicate himself. When he finds the two they are being held against their wishes by a strange kind of snake-handling cult leader, Aggie. Aggie has created a kind of commune in a FEMA trailer park where he has slaves and captives and is building an army. Cohen is originally welcomed into the commune. When Aggie's vision of how he intends to repopulate the south is clear Cohen knows he must move on. Cohen liberates Mariposa and Evan, his two assailants, and Evan's little brother Brisco. The small band heads North hoping to reach the line. The road is long and dangerous and all the while there are the continuous storms and heavy rains.


We learn a lot about Cohen that we didn't know along the flight and also about treasure and treasure hunters. This is an unusual apocalyptic novel and not so very far fetched. I felt a bit of Cormac McCarthy's The Road and maybe even a little of Margaret Atwood's The Year of the Flood. I do so love a good end-of-the-world novel.
Posted by Rebecca at 12:06 PM