THE SHADOW OF DEATH – JAMES RUNCIE 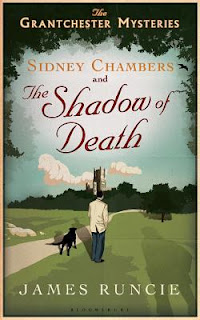 I very much enjoyed this first of the Grantchester Mysteries about Sidney Chambers. The series on PBS over the winter so charmed me into checking out the book from the local library. If Sidney Chambers was a real person I would have a crush on him. Tall, muscular, brown-haired (red in the PBS TV series), sensitive, kind, thoughtful, and a dog lover, who wouldn't admire him?

Set in the village of Grantchester, apparently not far from London, in 1953 Sidney is 32, unmarried, and the Vicar. His best friend is Geordie the local police inspector. It does have a bit of the “Murder She Wrote” feel except with no Angela Landsbury. There are quaint and funny stories about the locals but each chapter has a major crime to be solved. Sidney and Geordie team up because Sidney can snoop, ask questions, and listen to gossip where legally the inspector cannot. Sidney also has practical understanding of human nature which helps his friend sort out the clues of each mystery.

Sidney's life is complicated by his crotchety housekeeper Mrs. Maguire, his apprentice Leonard Graham, and his dog Dickens. He also has a complicated relationship with one young and beautiful socialite Amanda Kendall and a love affair with a German widow Hildegard Stauntan.

Bike-riding Sidney helps Geordie with a suspicious suicide, a murder of a jazz club owner's daughter, a jewelry heist during a dinner party, and a really creepy incident with an art forger. Not without getting himself into some hot water though! Social issues crop up like the freedom of women and homosexuality too and it is interesting to me to see those issues from the filter of the 1950s perspective.

Sidney himself is a deep and interesting character. Having survived WW II he is not unscathed himself and is very good at ferreting out the raw feelings of people hidden beneath their carefully constructed shells. I liked this book a lot and hope to read more of the series.