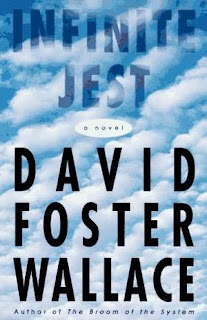 Three years ago I read Foster's Pale King which I described as a novel-in-stories and said was full of “run-on sentences and stream-of-consciousness type writing” and all that is also true about Infinite Jest. Paragraphs last many pages and the stories are not even remotely chronological in this 981 page tome. The story is followed by another 100 pages of footnotes, some of them being pages long. Even motivated by a great desire to read this book I still found it a difficult read. Also, I had to keep the online dictionary open.

What genre would best describe this book? Perhaps futuristic dystopia, political satire, dysfunctional family comedy? All of those and more. It is multi-layered with many characters and most, if not all, of those characters are unusual bordering on the bazaar. The vehicle for presenting to the reader philosophical questions about government, families, cultures, morals, etc. is through vignettes of dysfunctional families, primarily between a drug rehab facility and a tennis academy. America as we know it does not exist. The United States and Canada compose some kind of unified entity called Organization of North American Nations or O.N.A.N. governed mostly by corporations who can buy anything including naming rights to years. On page 223 is a list of all the years covered in the book chronologically.

There resides on my own personal library shelf a skull named Yorick so I know the title comes from the line in Shakespeare's Hamlet, in which Hamlet holds the skull of the court jester and says, "Alas, poor Yorick! I knew him, Horatio: a fellow of infinite jest...” and the plot revolves around a piece of failed entertainment (a film) or “jest” that is missing and declared dangerous because all those who view it become obsessed with watching it doing absolutely nothing else. Some anti-O.N.A.N.s have launched a plot to acquire the master copy of the film in a terrorist plot to use it against the United States. The plan is that by mass dissemination they can get Americans to do nothing, therefore destabilizing the country and the organization of O.N.A.N.

Infinite Jest is full of sarcastic humor and I am glad I read it. It is often referenced in book blogs and articles, and now if some of my “more literary” friends comment on it I can participate in discussion. My favorite lines from the book are as follows: “That you will become way less concerned with what other people think of you when you realize how seldom they do. That there is such a thing as raw, unalloyed, agendaless kindness.” - Narrator voice pg 203.