THE GIRL ON THE TRAIN – PAULA HAWKINS 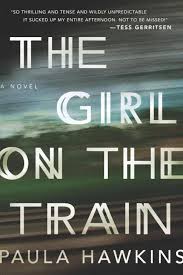 If you liked Gone Girl by Gillian Flynn, and/or you like to remain confused until you find out that characters in your book are not what you believe them to be, then this book is for you. What a hoot! I did not want to put it down as soon as I started it. But then it wouldn't have been prudent to be late to work so it did have to be put away on Thursday long enough for a 5 hour shift at the library.

Billed as a psychological thriller, it isn't actually all that “thrilling” until right before the end, then it all comes together so fast. The girl on the train is Rachel. She rides the train every day into and home from London. She has many emotional problems and is an alcoholic. Having recently been fired from her job she continues her routine in an effort to prevent her roommate from finding out. In London every day she goes to the library, visits pubs, and walks. The daily train ride takes Rachel through her old neighborhood. At a stop Rachel has a few moments every day to be a voyeur for she can see into the back yard and through the windows of the house where she had lived in happier times. Her ex-husband, Tom still lives in her old house but now with a new wife and a baby. In another house up the road from Tom's lives a nice looking and seemingly loving young couple whom Rachel calls Jess and Jason She dreams up a wonderful life for them in her imagination and very much enjoys looking for them every day to see what they are doing.

Rachel's depression and alcoholism are debilitating. She is very unhappy and still in love with her ex. She continues to contact Tom and his wife which is considered harassment, some of which she doesn't even remember. Then one day from the train Rachel sees the woman she calls Jess kissing another man. A few days later Jess, whose real name is Megan, is reported by her husband Scott as missing. Rachel tries to get involved in the case by notifying the police about what she has seen but she is an unreliable witness and not taken seriously by the police because of her reputation of harassment and public intoxication. When she contacts Scott things don't go well either.

Many in this book are not who they appear to be and some have mysterious connections. Scott is a very possessive hot-head and a bit violent. Megan had at one time been an nanny for Tom and his wife Anna. Anna had been the lover of Tom's while he was still married to Rachel. The mysterious man that Meg was kissing is her psychiatrist. There are dark secrets, lies, hidden motives, and confusion. I guarantee by the time you get to about page 244 the power better not go off unless you have candles or a book light because you will not be able to stop reading.

Isn't the cover art clever? The scenery is blurred representing what things look like on a speeding train and the double lettering which is how print in a jostled book often looks when reading in a moving vehicle.
Posted by Rebecca at 6:43 PM