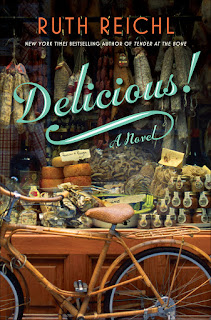 A lot of descriptions of food in this book so you might get hungry. This one I really like about as much for the character descriptions as the plot. In a way I was reminded of The Particular Sadness of Lemon Cake by Aimee Bender because this book also hinges around a person with exceptional taste buds.

From page one we know Billie Breskin is running from something painful. She has fled California where she and her sister had a successful business called Cake Sisters and dropped out of college. Really, before half-way it isn't too hard to figure out where her idolized older sister is. But, until then we get to know Billie as an angst-filled young woman trying to find a place to be where she can use her talent of taste. She can taste anything and describe exactly what all the ingredients are. She lands a job at Delicious! a food magazine office which is in an old mansion in Greenwich Village. But the dream job doesn't last when the magazine is closed. Billie is the lone employee who stays on for a few months to take calls and fulfill the magazine's obligations to send refunds to subscribers who find the magazine's recipes lacking.

In a secret room of the mansion where all of the correspondence of the magazine reside Billie finds a series of quite inventively hidden letters. They are from WW II between a former Delicious! chef, James Beard and a young girl named Lulu Swan from Akron, Ohio. There the plot gets much more interesting as Billie tries to find all of the letters and then to find Lulu. Lulu's letters complain to Beard about shortages and he in turn encourages her with making improvisations to her recipes. I was reminded of my mom and my grandmother who had collected recipes from the 1940s that creatively worked around the shortages of the times. They used to like to get them out a make them for our family. I in turn have kept those recipes and therefore I very much enjoyed hearing about wartime recipes in this novel.

I enjoyed the quirkiness of the characters introduced like Sal the Italian cheese shop owner, Jake the beautiful editor man for whom life is too easy, and Sam the sensitive eccentric gay writer and more. But along with that I liked the interjection of some history such as the cultural persecutions in America during the war and of the 1950s McCarthy scare tactics leveled against communists and homosexuals (not unlike some of the prejudices promoted today). Yes, this may be a bit too sweet (or saccharin) for some readers, but still it is good escape fiction and really quite fun.


Maybe not the most literary choice or even very deep or insightful, but I liked it.
Posted by Rebecca at 10:45 AM