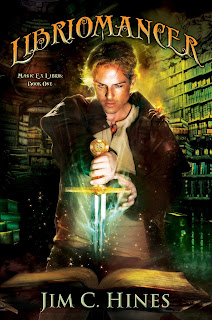 Libriomancer is one of those books that drops you into the middle of the action without any back story or character setting. Often that can be unsettling and cause for rereading once you catch on. Granted, at about the second chapter and after a series of characters had been introduced, I did go back and reread the first chapter. However, this short (300 page) book was just what I was craving and I didn't mind. Being a librarian myself it is a rare treat to find a book about loving books, and one where the hero is himself a librarian. It actually had a Neil Gaimen (a favorite author of mine) feel to it with a world of magic and sorcery overlapping our reality. I guess that aspect is a little Harry Potter-ish too. Anyway, what librarian doesn't want to read about a librarian who is kind of a “bad-ass” who slays evil creatures to save the world?

A Libriomancer is a rare magical person who can reach inside of a book and bring into this world objects and creatures from the story. Of course they can't stay and must go back into the book, but while in this world they can be most helpful. Haven't you thought on occasion it would be useful to have Alice's elixir to make you small, or Luke Skywalker's light saber to slay your enemy? In this “Magic Ex Libris” book one the world of magic is guarded and kept secret from mortals by those called Porters. Porters monitor and guard the world from supernatural threats. Isaac Vainio is such a Porter and also a Libriomancer. He also is a librarian in a public library in the Upper Peninsula of Michigan.

When vampires attack Isaac in his library he knows evil is afoot and someone must stop it. He teams up with Lena Greenwood, a Dryad, to find out why the vampires are revolting and where the missing Johannes Gutenberg has gone. As the first Libriomancer, Gutenberg is still alive these hundreds of years and someone is using his knowledge of automatons to destroy the vampire nests, frame the Porters, and turning the magical world against them.

Lena is a creature that grew from a graphic fantasy novel written by a twenty something man so you can guess what she looks like. Right, voluptuous, muscular, glistening skin, intense eyes, very sexy. Every young man's dream. The book is full of both traditional and contemporary vampires from Sanguinarius Stokerus (human blood-drinking vampires as written by Bram Stoker), the Meyerii (glistening creatures who have evolved from the writing of Stephanie Meyer's Twilight series), and the Sanguinarius Henricus (those incapable of acting against their masters as written in the books by Charlaine Harris in “Sookie Stackhouse” books). There is magic, adventure, danger, and even romance in this fast paced fantasy book.


On the job, a working porter Libriomancer has to carry his or her books along with them, and each Libriomancer works with a preferred genre. Isaac works with fantasy and science fiction books thus wears a big coat with hidden pockets for his books. Throughout the centuries much has been learned about Libriomancey and the craft has been refined. So many books are mentioned. Many I knew but some I did not so you can imagine how thrilled I was to discover the bibliography in the back listing all the books referred to in the text. Fun fun! I enjoyed Libriomancer very much.
Posted by Rebecca at 4:29 PM