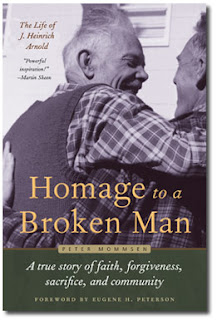 To condense this whole book into one thought I would say that it is a story about a humble, spiritual man, who creates a life of love and beauty only to be stalled by men of ambition and manipulation. And yet his vision is carried on over generations and decades. This true story of a devoted Christian man and his family establishing, and trying to maintain, communal life is fascinating and often heart-wrenching. J. Heinrich Arnold is the main focus of the story even thought the dedication to communal living and the original commune was begun by his father Eberhard Arnold in Germany in 1919. The author is the grandson of J. Heinrich, and though he speculates on much of the dialog and of course must rely on the memories and writings of his elders, the story holds together as a spiritual journey and a look into a type of living that deserves respect.

I have always been in wonder about how a commune is established and how so many people can make it work. The Arnold's community was originally, and continued to be, organized around farming and publishing. The founders were college educated theologians and they accepted everyone not just Christians but Hindu, Jews, and atheists as well. No one was turned away who truthfully wanted to live humbly and spiritually if willing to contribute to the community. The society was based on the concept of religious socialism which they patterned after the Quakers. Page 145 probably has the best description of who it was that flocked to the Arnold communities, “communists, socialists, agnostics, atheists, and others who were fed up with the empty promises of the churchianity.”

There are many stories of working faith, but also the trials of fund raising, the complexities of governing a flock, organizing a working village, and of human failings and power struggles. The Commune had to leave Germany out of fear for their members lives and threats of arrest of the leaders in the 1930s. The scenes of the Nazi raids and arrests were frighteningly portrayed. When they fled Germany they eventually had successful communities in England, Paraguay, and New York. Always the goal was to be inclusive, show the love of God, help your neighbor, and instill in the children reverence for nature, honesty, chivalry, bravery, and generosity. The love stories of Eberhard and Heinrich with their wives and families are wonderful also. Never did I imagine that living and and running a commune would be so complicated and I had to wonder if every commune whether political or religious suffers the same problems. My guess would be “yes” or there would be more surviving communes today.


This is a great book to see inside the workings of a such a community but also to feel how groups of like-minded people can be committed to a different way of life. The titles of the chapters are delightfully related to the content such as “On the Road” when the community is moving and “Liberation” when in the 1960s Heiner is in the United States and falls in love with the country's fight for civil rights. He marches with Martin Luther King and yet is alarmed by some things he sees that had been the downfall of Germany such as militarism, economic oppression, and racism. As I thought about that chapter I had to think about how we have come so far since the 60s and yet in some respects things are still the same.  It is apparent that this beloved grandson reveres his family and his book is a true loving portrait of an extended faithful group. I am not sure why Mommsen calls his grandfather "broken" for it seemed he was at times but not most of the time and not by the end of his life. It was a good excursion with the Arnolds over nine decades and several continents.
Posted by Rebecca at 4:39 PM