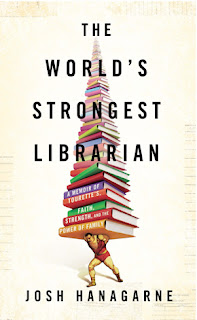 Apparently there is a gigantic man working as a librarian at the Salt Lake City Public Library and this is the first of his memoirs. Written humorously with much banter interspersed with seriousness, it was a delight. We read it for Jay County Public Library Book Club but I worked that day and forgot to go! Oh horrors. I really wanted to have that discussion. However, three friends came through for me and showed up the next week for a breakfast discussion at my house. We all enjoyed the read and had a lot to mull over about Mr. Hanagarne's book.

The book is a jaunt between vignettes of library work-life, autobiographical narratives of Mormon childhood, and his excursions into body-building and strength training to combat the effects of Tourette Syndrome on his life. There are so many insightful quotations that my book is full of sticky notes that I keep looking at. My favorites of course are those about being a librarian and working with patrons since that is what I just spent 30+ years doing. Too many to reiterate in a short review I'll just give you one as follows:


Hanagarne's love of books and libraries began in childhood and served him well. He remembers his first book love as Charlotte's Web and how it affected his first years at school. He remembers also how important books and trips to the library were and how this shaped his psyche. You can tell that Josh enjoys being a generalist librarian knowing a little about a lot of things and being able to assist his patrons well.

His dealings with Tourette's is fascinating and heart-wrenching. While he was on a drug program at times what worked the best for him was working out and keeping on a strenuous regiment of weight training and a bit of mind over matter. His descriptions of his struggles are often hard to read and very poignant. Several programs and some very unusual people help him to find a pathway not to perfect health, but to compromises and acceptance of his condition.

His descriptions of Mormonism is respectful and eye-opening. While his mother was very devout his father just kind of went along with everything but didn't seem to really buy in to the whole doctrine. His father taught Josh that they basically belonged to “the church of Don't be a Dick,” or in other words be respectful, be kind, serve others, and do good deeds. It is clear that Josh subscribes to that today even though he has left his church.

The reader of this book sees an unusual man with a lot to contend with but who loves much. He loves his job, his family, and himself. He has remarkable strength of body and character. His writing style is upbeat, never maudlin, and very clever. He writes lovingly about his wife, marriage, and becoming a father. At discussion we investigated his website and see that he has since divorced which made us sad but we know with his determination he will make it OK. Great book.