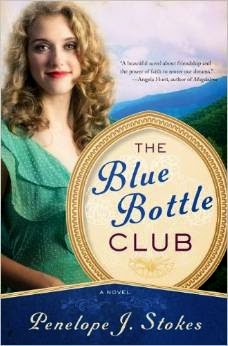 I read madly to finish my book club book for Monday because I have another one due next Tuesday and I need more time. Yikes! How do I let that happen?

My friends know I have always had difficulty with fiction books specifically written for “inspiration” and this was of that genre so you can guess my reluctance. My reasons for staying shy of the genre are the usual, contrived plot, controlled vocabulary, too predictable etc. That is not to say I never recommend them or say they are bad, just not my cup-of-tea.

That being said, this was better than most of the genre that I have tasted. On Christmas Eve in 1929 four young girls place written dreams and plans for their future into a blue bottle. They make a pact to forever be best friends and place the bottle on a rafter in the attic of one of their homes. Sixty five years later that bottle is found upon the demolition of that house. Brendan Delaney, a local newscaster, takes the bottle on a quest to find the four girls, now octogenarians, to see if their lives turned out as they wished and hoped. The plot was very intricate and sometimes I got lost thinking about how Brendan got places so fast and easily? She had to go from one side of the country to the complete opposite, then north, and home again in a matter of days!

Of course, none of the girls got exactly what they wanted, and all of them had to live through many tribulations. They became adults during the Great Depression and during a time when women did not do the things these girls wanted to do such as go off to be a social worker, move to NYC to become an artist, take off for Hollywood and become an actor. Only one wanted to stay home, marry her school sweet-heart, and have a lot of babies, which she didn't get to do.

Truthfully, I much enjoyed each of the women's stories. It is my opinion however, that the best story is that of Adora Archer, the preacher's daughter who ran away to Hollywood. She ended up trying to climb the acting ladder too quickly by getting involved with a director, ending up pregnant, homeless, and jobless. When she turned to her family for forgiveness they proclaimed her dead and had a funeral. That is the only part of her story that didn't feel true to me. The author did spend a lot of time showing the reader the hypocrisy of the Archer's church as one pandering to the wealthy and turning away the needy, but turning away your own daughter, to me felt off.

My second favorite was the girl who fled to the nunnery to escape her burgeoning family who ends up staying. She actually is the closest one to meet her dreams as she does become an artist and famous, just not via the avenue she sought.

Even though I liked all of the four life-stories, I did feel like the second half of the book got too preachy. Inside my head I felt like, “OK, I get it already!” But I also think people who love Christian fiction expect that and may look forward to it in their stories.


Sometimes I did the silent eye-roll when things got tied up too neatly, but I loved the four lives being so different and the convolution of each girl's path. I got the warm fuzzy “good-people-doing-good-because-of-their-religion” feeling via twisted life tales years ago when reading Billie Letts' books such as The Honk and Holler Opening Soon and Where the Heart Is, which I prefer – if that makes any sense to you, but if you are a female CF reader I would not pass this one by. It is not a guy book at all though and Letts' books can be enjoyed by all.
Posted by Rebecca at 6:45 PM