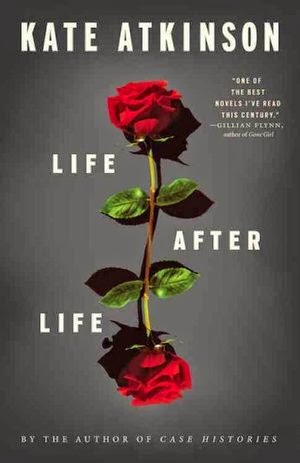 Oops, didn't get my book finished for book club! Well dang it, when a month has 5 Mondays it's hard to keep appointments straight! Never-the-less I did finally get it finished, then it took me a few days to decide if I liked it. It wasn't one of the best I have read, but it was interesting. At some place in the middle it got put aside for a day or two so I could ponder.

When I tell friends I just read a “born again” novel their eyebrows raise because they all know that being a hard-core mainstream protestant I don't go in for any of that charismatic fallderoll. (I don't mind those who do, to each his own, and every person needs to find his or her own path.) But, this isn't that kind of “born again.” Ursula, the protagonist is literally reborn many times, thence living many parts of her life over.

The first chapter is but a page and a half. Ursula is 30 (in 1930) and assassinates Hitler only to be instantly killed herself. The next chapter is her stillbirth during a snowstorm in 1910 taking less than a page and a half. Next chapter – birth again, but this time the doctor arrives in time to resuscitate her. The chapters then begin to get longer and the method of death comes later, and often quite shockingly. It was necessary to put a sticky note on the contents page so in order to go back and check each time a new chapter started to get my bearings. I have never done that before! Markers on footnote pages and on map pages yes, but never on the contents page. Many chapters/lives take place leading up to and during World War Two. Even though every time she starts a segment of her life over she doesn't remember the other life, each reliving leaves some residual impressions and dark fears. She even tells a psychotherapist that she feels that her life seems like a palimpsest which it actually is!

Some of my friends who read it didn't like the jumping from time periods and the lost feeling of not knowing where you were each new chapter. That was disconcerting at times, but I liked it constructed that way. If you want to read this book and don't like that style I guess you could read all the chapters by date, as I have heard some have done with Frazier's book Cold Mountain. Probably the author wants us to feel as disjointed as Ursula does sometimes. The characterization is really good, her family is quirky, but also full of poignant and often sad people. My only big beef is that in several re-livings there is a murderer of young girls. Sometimes the murders are evaded and sometimes don't. He is seen by the reader but never unmasked in the book, and he appears to never see justice. I hate it when that happens, even though I know in real life many, if not most, murders go unsolved.


Since this review ended sooner than I thought please allow me to digress about my discount used book from abebooks.com. I read most of my books from the library, but if it is for a reading group I often like to buy old and used copies so I can write in the margins or pass them along to friends and family. Now, I love abebooks.com but once in a while the description does not accurately describe my purchase as it did not this time. A few times I have complained to them but I gave that up as too much of a nuisance. I wanted a beautiful hard copy to put in my personal library, but the one I received is a discarded copy from a library which apparently does not use bookends. (Some of you will know what I mean.) My copy has lain too long at an angle on the shelf, the spine is broken in three places, and the beautiful decorative front end page has been torn out. I truly hate it when the sales description says, “good” when the piece is actually simply “acceptable.” One for my garage sale next summer.
Posted by Rebecca at 11:50 AM