THE YEAR OF THE FLOOD – MARGARET ATWOOD 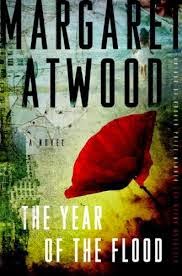 I rushed on to read this... what, companion maybe, to Oryx and Crake? It takes place at the same time so it is not a sequel. Anyway I was not disappointed. Atwood continues to say that what she puts in her novels are things that could happen or already have. Well, that's scary reading this trilogy! Once again Atwood begins her story at the end, after the “Flood” and proceeds to go backwards into the years prior. We once again see the strange gene-spliced creatures and the devastation. We begin this book with two women, one holed up in a sex club where she had been working, and one locked inside a spa.

This time however, instead of flashing back to look at the lives of the elite, the story resides in the Pleeblands, the communities outside of corporate protection, a land filled with sexual exploitation, lawlessness, hunger, and peril. It is painted truly as a scary place to live. Yet some people are there by choice. Those who see what might be coming, and those rebelling against the artificial protected societies. Oryx, Crake, and Jimmy are seen by the reader as background characters.

Twenty-five years before the plague, God's Gardeners are an eco-religious simple living group trying to stay under the radar of trouble, but preparing how they will survive when the end comes. They have predicted a catastrophe called “The Waterless Flood” coming and are dedicated to preserving as much healthy food and animal life as they can. Significant members of the Gardeners are called Adams and Eves followed by numbers. They are mostly people with scientific and medical knowledge and experience who have escaped from the corporations. The leader is Adam One and Eve Six is the alchemist/healer person. We also find in this book Zeb or Mad Adam that will serve to be the purpose of book three of the trilogy.

As the years count down (or up, or back?) we see the lives of Ren and Toby evolve via two distinctly different paths which are in themselves wonderfully enthralling stories. Also, we get to see the organization of the Gardeners which is very religious and includes doctrine, hymns, and sermons. The corporations own all intelligence, science, and math and rule the Pleeblands with paid troops of thugs and fear. By the time we get to the “Waterless Flood” we are left with the nuclear group that will survive and try to start a new civilization.


The scariest thing in the book? Giant brightly colored pigs with human brain tissue that can think, calculate, and fight back. (shiver) Oh, that and the huge blue genitalia of the male Crakers (sorry).
Posted by Rebecca at 7:15 PM