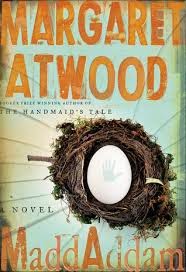 I read as fast as I could to finish this creepy dystopian trilogy. Freakish, horrifying, disgusting, and so great! Actually, it all seemed somewhat plausible also, in a not-too-distant future. I'm a little sorry to be finished. I did have a “walking dead” type of feeling with this one. Although, not with zombies. The first two books covered corporate greed taking over the world, total rape of the environment, degradation of all religion and culture, and science run amok, all combining to culminate in the almost complete devastation of the human race.

Shall we move on? A core group of survivors made up of God's Gardeners and Maddaddamites band together, lead by Toby and Zeb from The Year of the Flood, in survival mode. How they try to survive is what gave me the fighting zombies feeling. While being reunited with Jimmy and his band of Crakers, they also must contend with strange weather, food scarcity, aggressive genetically altered animals, and avoid evil “painballers” who were corporate prisoners completely hardened into roving evil thugs.

As with the first two books there is plenty of backstory. I was both shocked and enthralled to find out that Zeb and Adam One from The Year of the Flood had been half brothers. Their father, before the flood, had been a clergyman whose sermons supported the corporations, revered the petroleum industry, and reviled the ecologists. The boys had hacked into their fathers accounts and emptied them. Knowing he was politically connected they had to separate and go into hiding. Zeb became Mad Adam and his brother Adam One. When it was safer they had reunited and founded God's Gardeners.

The survivors create a compound, but it is exceedingly hard to find and grow enough food and to stave off animals. Search parties need to look for other people, Jimmy, who keeps the Crakers in line is sick and may not live. So many problems! It occurs to Toby that their hope for survival may lie with the Crakers and she takes over their teaching. They have limited abilities to understand and so she begins her lessons through fables and myths. They must learn language, writing, and some form of history. Is humanity as we know it dead? Can a new society emerge, or will humans be replaced by artificial people? Even bigger than that is will the planet support life at all?

I have thought about watching the HBO movies based on these books, but I am afraid.