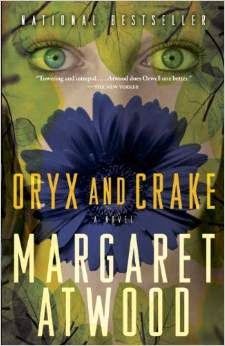 I was rereading this in late December (I first read it in 2003) so I could proceed to The year of the Flood and not be utterly lost. However, my mom was very sick and I forgot to finish my impressions. Just now getting back to my notes about this wonderful dystopian lit, although I don't think that is what Atwood calls her work. She seems to stick more to calling it “speculative fiction” writing what she truly thinks might happen to our world. With corporations running most countries, genetic altering and scientific experimentation going unfettered, it is hard not to fear outcomes such as she points to in her work.

In Oryx and Crake we follow the narrator called Snowman who believes he may be the only truly human survivor of a virus that has wiped out humans leaving behind all manner of strange genetically spliced animals and a tribe of human-like beings called Crakers. Of course, Snowman is lonely and despondent but he also sees himself as the caretaker of the Crakers who see him as some kind of deity. He tells them stories of a fictional “Oryx and Crake” to try to teach them things and in an attempt keep them safe. They have a simple intelligence and he needs some way to control them so he invents for them legends and ritual.

While going on supply forages the reader sees, through Snowman's flash-backs, the world before the catastrophe. Terrible misery, violence, and poverty were obstacles for those who live out in the unregulated “pleeblands” while others lived protected by the gated corporation communities for which they worked. Families like Snowman's lived protected from the outside and the children went to specific exclusive schools. Snowman was then called Jimmy and he lived a life of privilege, playing video games, smoking weed, investigating pornography and violence from the safety of his and his best friend's home. Jimmy's best friend Glenn, nicknamed Crake, became a renowned geneticist evolving into a demented scientific genius. The world fell apart. A plague (planned) was unleashed and began to kill off all the humans of which only a select few had the antidote. Jimmy and Glenn both loved the same strange genetically altered female, Oryx which lead to murder/suicide with Jimmy/Snowman being the lone survivor. To the Crakers Snowman paints Oryx and Crake as loving saviors and caretakers but to the reader he shows their warped roles in bringing the world to its sad end.

Dark stuff, no? Yes, but if you are a lover of the post-apocalyptic genre this trilogy is a great one. I have met some who thought it too weird, dirty, or nasty. But those of us who love it, will read it again willingly. I have already read the next two books and must blog about them, so this review cannot take too long! Go for it and if you are buying your own copy try to find one with the superb artwork of Hieronymous Bosch's “The Garden of Earthly Delights” or Cranach the Elder's “The Fall” for you will want to keep it and you will want the beauty.