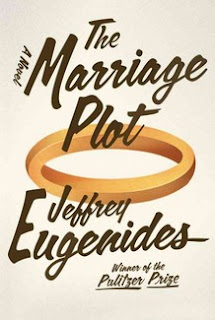 Just finished this book today. Muncie Kennedy Library group discussed it last Thursday but I couldn't make it so I put off reading it. Having previously read Middlesex which I loved and Virgin Suicides which I did not, I was looking forward to trying another by Eugenides. Once I started it this past Sunday afternoon I had a hard time putting it down. It was so exciting to start a book where all the characters are readers and everyone is enamored of higher education. There are so many references to books, and authors, and studies it felt like being young and in college again. My friend, Mike who also attends the Kennedy group said that he and another group member didn't really click with this book but the rest did. Upon finishing it I will tell you that I was so entranced during the first half that it was rating it four to four and a half stars out of five and numerous sticky notes were everywhere. Then... yesterday I got to about the middle of the chapter “Pilgrims. From there to the end there are only five sticky notes. The last few chapters became tedious but the book ended with a very good and satisfying conclusion.

Eugenides does not disappoint when it comes to the overlapping and interesting plot, great expressive language, and clear character development. In this book he takes the reader through a roller coaster of emotion with a bi-polar/manic-depressive man. The book itself is not so much about him but the two other people whose lives are closely connected to his. Having known a few bi-polar people, the examination up close of the illness as presented in this novel by Eugenides was fascinating and as far as I could tell fairly portrayed.

In 1982 Madeleine, Leonard, and Mitchell become freshmen at Brown University. Mitchell is a shy, not sure what he wants to do with his life, religious scholar and is almost immediately smitten with Madeleine. Madeleine is a beautiful, brilliant, English major studying semiotics, and through the eyes of Mitchell perfect. Leonard is a large, ruggedly handsome, promiscuous, and charismatic philosophy major. You can see where this is going romantically. Mitchell loves Madeleine, Madeleine loves Leonard, and Leonard mostly loves himself.

My friend Mike talked about this novel being in the “deconstruction” style and so it is. The first chapter starts with graduation day and then works backwards through the college years of the three main characters. The college chapters are great, full of interesting situations, wild parties, a lot of weed smoking, and getting high. But also of wonderful conversations about books, authors, theories, ideas, and philosophy. One of my favorite pages is 57 when Leonard and Madeleine talk about becoming famous and Leonard says, “My goal in life is to become an adjective.” They then try to decide if they want their last names to be made adjectives ending in esque, ish, or ian. I myself wondered if my last name of Dann could become Dannish, Dannesque, or Dannian as in, “Oh that is so Dannesque!” when someone says something profoundly articulate.

By senior year Madeleine has let her life be ruled by Leonard and Mitchell has come to the conclusion that he is destined to always be her friend and never her lover and he vows to move on and get over her eventually. One of my favorite Mitchell thoughts is when he sees Madeleine with her lover and, “In Madeleine's face was stupidity Mitchell had never seen before. It was the stupidity of all normal people. It was the stupidity of the fortunate and beautiful, of everybody who got what they wanted in life and so remained unremarkable.” I found that to be a thought I myself have proposed to my own children about people who are too pretty. Perhaps that is why I identified with Mitchell? I really enjoyed his character. The Mitchell chapters were interesting and full of adventure and it was fun to watch him evolve into a man ever searching for real meaning in life.

By contrast after graduation the Leonard and Madeleine chapters devolve into madness and care-taking, stress and uncertainty. Leonard is not a likeable character and Madeleine became tiresome. Also I hate to admit it but it became apparent a man wrote this book in the descriptions of the love making that were way too graphic, weird, and actually not erotic. The description of bi-polar behavior, the warning signs, the treatments, the effects of the drugs, and the behavior modifications family members must deal with were expertly worked into the chapters taking these two through their first year out of college and attempting to start a life together. Some of the situations did make my heart race with worry and I had to hurry through to find out what terrible things happened to Leonard during his breaks with reality. A section I did like was when Madeleine examines her love of 19th century classics by authors like Austin and Bronte and goes off to a conference where she meets new friends and decides on a future path for herself. I then had hope that she would dump Leonard and fly on her own. Oh well.

After graduation Mitchell and his friend Larry took off on an adventure across Europe. Mitchell's plan was to end up in India volunteering for Mother Teresa which he did but not before a bit of a side trip involving a homosexual encounter. Mitchell ends up back in New York at the same time as Madeleine and Leonard soon after another of Leonard's psychotic breaks. The ending chapters I must say were great. I was afraid things were going to end up too neatly tied up and with everyone happy ever after (I hate it when that happens). There was an ending and closure and it was good.