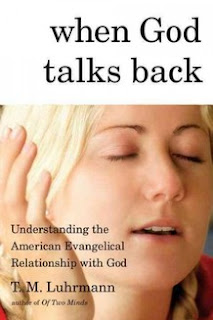 Reading this book was instigated by a discussion at our church book group. We were reading Desmond Tutu's new book (this will be in a separate blog) and discussing prayer when we started talking about how some of our friends and coworkers speak about prayer differently than we do and that sometimes we don't quite understand how to respond. Then this book appeared on NPR so my friend and I decided to look it over. To clarify – we don't think there is anything wrong with thinking or doing things differently than we do, but we want to understand why certain denominations do and say the things they do that seem so different from what we have grown up believing. Understanding is the key. When a few times that I have tried to gently ask a person who attends a charismatic or fundamentalist type church questions the response was often a defensive quip like, “It's in the Bible just read it.” That is not really helpful to broaden understanding, so to a book we went.

Reading the first several chapters of this book was very enjoyable. The history of the evangelical or charismatic movement across the nation was interesting. However, the author is an anthropologist and the book soon began to feel like a doctoral dissertation that became a book and I began to drown in information too technical for me. Do you know the difference between apophatic and kataphatic prayer? I read about it and still don't get all of the nuances. The best parts of the book for me were the footnotes.

The author was kind and respectful towards her study subjects. Too often those who don't agree with their subjects end up making fun of them and that is not what I was looking for. I wanted background and explanation without opinion or criticism. Luhrmann seemed professional, sincere, and careful.

Lurhmann explained that perhaps the biggest difference between these types of sects or denominations and those I grew up with is that they have made the break from academic Bible study such as we know. They do not care so much about the historic background of the texts. They are reading them as messages specifically to the reader. Mainstream denominations insist that pastors be educated, that it is important to study who wrote the original texts, why and for whom they were written, how many times and into what languages they were translated, and also discussions of what they mean for us today.

Reading about how differently we all view prayer was most enjoyable and educational. It was so interesting to read about training the mind, de-centering, reaching an almost a trancelike state in order to feel that God is talking to one directly. However, that same chapter offers up stories of girls praying about hair styles, what color to polish their toenails, and talking about God as being their “boyfriend” which I did not enjoy. But still, it is good to see that when people talk about  how they pray and about God being beside them and talking to them they are sincere and simply view the world differently than some others. Luhrmann covered worship demonstrations also like swaying, waving of uplifted hands, crying, and shouting during services. I would have to say that I am not comfortable with those things but it is good for me to read about why it is done and to be understanding.

When Luhrmann discussed demon possession, tongue speaking, and faith healing she did so with reverence except for one little humorous interjection. I am an introvert so those things will probably never be on my agenda. But, if that makes some people feel closer to God then that is what they need. There is so much more in this scholarly book like; spiritual direction sessions, God as therapist, singing as prayer, the feel good blurries, emotional cascading, and becoming a prayer warrior that I simply don't have time for right now. But if you want to understand these things and have not grown up with it this book is for you.

If I am to be entirely honest I would have to say that it is comforting to me also to learn that this movement is relatively a new thing beginning around the mid to late 1800s. The reason that is comforting to me is that since for almost 2,000 years Christians worshipped without it so... I'm ok.
Posted by Rebecca at 7:52 PM