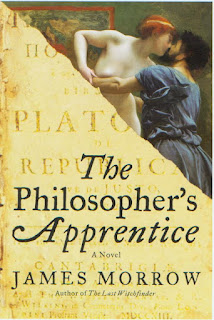 Do you totally understand your own moral compass? Does anyone? Why do we all see morality differently? I certainly think about morals and try constantly to evaluate my beliefs. While I do try to stick by my beliefs and back them up with faith and facts I also have very close friends who feel that my compass is “off” so to speak. They believe that their brand of morality is better, cleaner, or more Christian than mine. Obviously I don't believe them but I also know that as I have aged I have changed my compass somewhat and probably will again, but so might they.

Mason Ambrose is a Darwinian ethicist who has read about, studied, researched, and grappled with morality and written a book intended to be his doctoral thesis. When he fails to complete that process he takes a job on a remote island for a reclusive millionairess, Edwina Sabacthani. He is hired to tutor Sabathani's teenage daughter who apparently has amnesia to the pint of being a tabula rasa or blank slate. His job is to develop in her psyche a moral compass. Soon Ambrose discovers that Sabacthani and her assistant Vincent Charnock have been experimenting with genetically engineering plants, animals, and humans. They have created by artificial means three “daughters” for Edwina who is herself terminally ill. The girls were created by inserting DNA into donor eggs. The fetuses were then aged in a special vat or ontogenerator which speedily advanced them to the desired age after which each child's brain was advanced with the use of programing from a “dunce cap.” Donya is chronologically aged to five, Yolly to eleven, and Londa is 15.

Taking note of the following quotation as a bit of foreshadoing, it was clear early on to me that the daughters Sabathani would not end up well:

In recent years I'd seen Max Crippen's sculpture of the Crucifixion rendered entirely in LEGOs, Valerio Caparelli's Norman Rockwell-style painting of God inseminating the Virgin Mary on their first date, and Leonard Steele's rock opera set in the Vatican's luxury suite for retired pedophile priests, but what Edwina and Charnock had achieved was sacrilege of a wholly different order, blasphemy beyond the meaning of the word. (pp.87-8 of the paperback)

Upon Edwina's death the girls are assigned guardians and trust funds. Ambrose heads off to begin his own life. Londa and Yolly create an empire for helping women including a multi-million dollar complex housing lawyers, medical consultants, and activists of all kinds working on women's social issues. Ambrose and his wife, Natalie face serious health issues leading them to choose abortion over endangering Natalie's life. Ultra religious fanatics join forces to destroy the Sabacthani empire. Vincent Charnock becomes depressed and reclusive from guilt about what he has done with the Sabacthanis and sells his creation machine to the religious fanatics. Soon populating this book are aging creatures made from aborted fetuses, animatronic non-humans, and “created” people called immaculoids who are programmed to accomplish specific tasks.

This book pretty much satirizes everything, religion, atheism, pro-choice, pro-life, capitalism, socialism you name it. Actually, I think that is the point. All philosophies, even those based on goodness or philanthropy, if allowed to reach the fevered pitch of radicalism, become not only ineffective but harmful. The plot is complicated, the characters are colorful, and one must pay attention to detail. But I must say I really liked The Philosopher's Apprentice very much. We discussed it last evening at the Jay County Public Library book group and I did not hear anyone say they did not like it. Many said it was a hard read but worth it. It behooves me to say I did have to look up references to mythology, philosophy, vocabulary, and some people referred to. Not as smart as I thought I was apparently.
Posted by Rebecca at 5:14 PM