THE SWEETNESS AT THE BOTTOM OF THE PIE – Alan Bradley 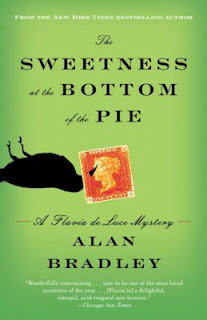 Once in a while I pick up a book simply because the cover calls out to me. I always told my students not to rely on covers to choose and yet... The beautiful shaded jadite green of The Sweetness at the Bottom of the Pie caught my eye. Coupled with a delightfully dead very black crow with postage stamp stuck on its bill shouted to my psyche to take it home, which I did from the used book store for a mere $8. I reasoned that even if I didn't like it the book would serve to inject a punch of color to one of my many bookshelves. Who could not be captured by any book whose first sentence on the back cover contains the words “wickedly brilliant?” Also listen to this first line on the first page! “It was as black in the closet as old blood.” The last thing I checked before heading to the store front was the author info since I wasn't familiar with the name. I read there the sentence, “He lives in British Columbia with his wife and two calculating cats.” Hooked, I was.

This mystery comedy is set in and around a crumbing old mansion, Buckshaw in the 1950 English countryside. In this mansion are living the de Luce's, an aging widower, three daughters, and a butler/caretaker older man. Mrs. Mullet, the cook housekeeper comes and goes each day. The sisters, Daphne, Ophelia, and Flavia are at odds with each other as most siblings are when young. Eleven year old Flavia de Luce is the youngest the protagonist of the tale and the narrator. Flavia is extremely precocious, intelligent, and aspires to one day be a famous scientist. In the attic of the old house is a very elaborate chemistry lab left by an uncle and once used by Flavia's mother, Harriet de Luce before her mysterious demise on a far off expedition years ago. There Flavia spends hours studying, writing, and plotting revenge on her sisters. Her speciality is poisons.

Introduce, a mysterious stranger, a dead bird, a rare postage stamp, and a dead man in the cucumber patch. Of course the local authorities are bumblers of the case and Flavia begins to investigate the crime getting herself into danger and complications. Yes, there is silliness, but it is a one afternoon lark of a read. I am thinking precocious preteens and early teen readers could get hooked on this series if offered to them in the right way. Kids who enjoyed the Lemony Snicket Series of Unfortunate Events books might move on to this series particularly if they like a their humor mixed with the macabre, and a bit of fancy language tossed in. I certainly don't know many teens or preteens that know the meaning of philatelic (study of stamps and postal history), vicissitude (state of being changeable), copacetic (very satisfactory), or boulevardier (man-about-town). But then most adults I know don't either. I don't know if they keep them there forever, but there was a really nice trailer on the Amazon page for this book called, “Take a Tour of Buckshaw with Flavia de Luce” that is fun. Also there is the Flavia de Luce website http://www.flaviadeluce.com/ and I see that three more books in this series have already been released.

Alan Bradley is Canadian. I guess I have to say I haven't read many canadian authors. Oh well, should I put this book here on the shelf between Pilgrim's Progress and My Collected Stories by H.G. Wells? Think I will...done.