IN THE WOODS – Tana French 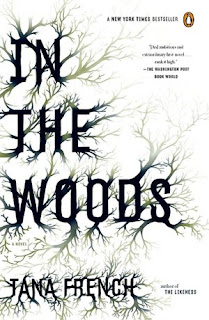 My friend, Sherry recommended this book more than a year ago. As my hand walked across my shelf of unread books many times I kept not choosing it. Why? I have no idea. But last month during group at the Kennedy Library in Muncie, Indiana a delightful young woman mentioned it and said she would be reading all of Tana French's books which spurred me to go home and pick it up. It does have a sticker on the front announcing it as an Edgar Award Winner (2007) so I had a hint it might be a good mystery.

It certainly had the creep factor going. This is one of those plot within a plot books. Rob Ryan, is a police investigator for the murder squad in Ireland. He is also lucky enough to have as his partner his best friend, Cassie. When Rob and Cassie are assigned to investigate a murder of a young dancer it takes them to the very village where Rob grew up in Knocknaree, just outside of Dublin. Twenty years earlier as 12-year-olds, Rob and his two friends went into the local woods to play and the only one to ever return was Rob who cannot remember anything of that day. While investigating the bludgeoning death of Katy Devlin a young, bright, pretty, and lovable 12-year-old girl of Knocknaree, Rob stumbles upon some old evidence and begins to think he can put together the pieces of the disappearances of twenty years before. And there the plots get mingled.

Along with the creepiness of the past unexplained crime, there are so many sad characters in the present. Those left in Knocknaree who cannot move on or move away for fear of not being there in case their lost loved one returns and those affected by the loss of a lovely young girl whom everyone seemed to adore. The Devlin's are devastated by the loss of their child. Mrs. Devlin is in deep depression and there is something odd about the oldest girl who is extremely over-protective of their other daughter who is mentally handicapped. Rob himself is a sad person. He relives parts of his childhood in an attempt to try to remember more. The loss of his two best friends as a child haunts him continually. It's also really sad that he can't seem to have a lasting relationship, not even with his own best friend.

There are many characters and many suspects in both stories. The only thing is, I pretty much new early on who murdered Katy Devlin, or at least who had instigated the crime. I don't want to be too hard on this book because there were parts of it I really liked and I do think this author has promise and would consider reading another of her books. But, I found a lot of the angst between Rob and Cassie a bit contrived and overdone. Some of the description, especially of police procedure became tedious for me but a lot of crime novel readers like that so I tried to overlook it. This 400+ page book could have used (IMHO) some better editing and been half as long and a better read. But I did like the mixing of the crimes, and the characters seemed real to me with normal emotions. Except for Rob, he is way too easily seduced by Katy's older sister. At his age and with his experience he should have been a lot better at dealing with her and recognizing her deception. Rob is just too dense for me to like. Cassie is much more perceptive and tells Rob what he needs to look for, and is right every time. But he never listens to her! I also didn't like it that more isn't revealed about the old crime. After all his investigating, Rob gets no closer to solving that mystery. Hopefully in another of her books he gets closure.
Posted by Rebecca at 7:43 PM