WHAT'S THE LEAST I CAN BELIEVE AND STILL BE A CHRISTIAN? - Martin Thielen 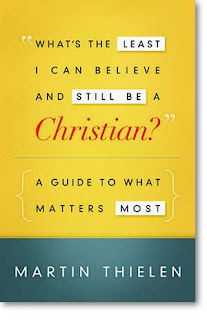 First Tuesday book discussion with Pastor Mark Strietelmeier always lasts well over an hour and we finally, after two hours, had to just decide it was late and time to disband. This was a great read for us. Mark doesn't pick the books we read, it is a group decision and we don't always like what we pick. This was a suggestion and I wasn't sure it would be “my cup of tea” as referring to the title I thought it would be shallow or vapid. Oops, mea culpa. The title actually originated from a question Thielen was asked by a friend of his who was/is an atheist. It occurred to him that for an unbeliever or the questioning one this was a great question which lead to some deep thinking and resulted in this delightful book written in an easy conversational style. It was in actuality quite affirming for me and I would venture to say for most, if not all of the attendees last Tuesday.

The author is a Methodist pastor of Lebanon First United Methodist Church in Tennessee. He has several pages dedicated to his own faith journey and descriptions of how and why he evolved from being a fundamentalist to being a biblical scholar and then to becoming a pastor of a church in the “mainstream” Christian community of today. But the meat of the book is divided into two parts; the things you don't need to believe, and the things that are essential to believe. Sounds simple, no?

The first half of the book covering all the things that a Christian person does NOT have to accept was presented in such a kind and caring way that it gives one the relief of knowing he or she is not alone in thinking that it is not necessary to accept all of the rightist-fundamental rhetoric that is so popular right now. Thielen covers all his points in detail and with historic background. When I read that the concept of the rapture is not Biblical or historically Christian I felt much relief for not even knowing about it until the 1980s. What a joy to be told by a preacher and scholar that it is perfectly alright for me/us to not accept any of the following; inerrancy of all the Bible texts, God causes tragedy for retribution, women should be subservient, evolution is heresy, you cannot doubt, you do not need to care about the environment, the rapture, only Christians go to Heaven, God loves only straight people, the Bible should be taken literally, and last but not least... its ok for one to be loud, obnoxious and judgmental with doctrine. Thank you Pastor Thielen!

The second half of the book is dedicated the good news about following Jesus. What it means to be the ones who focus on the Gospels, spread the Word, give and accept grace. When reading the second half I felt validated but also I saw that any person reading this book could see that there is a real and healthy alternative to following a path of close-minded and judgmental religion. Here is a favored quote from Thielen stating his purpose:

That alternative is positive, vibrant, open-minded, grace-filled, gender-equal, life- giving moderate and mainline faith. And that kind of faith—centered in the life, death, and resurrection of Jesus—answers the big questions of life including: Where is God? What matters most? What brings fulfillment? What about suffering? And is there hope?

In concise clear chapters Thielen expands on where the theological ideas presented in his book come from, the historic background, what they are specifically saying and why we do or don't have to accept them. What specifically does Thielen mean when he talks about  “mainline faith” I'm not 100% sure but he did refer to the following at some point: Methodists, Baptists, Lutherans (ELCA), Catholics, and Episcopalians, and maybe some others I'm not sure. But I would guess if you read his book you would know if you are mainline or not.

Just an aside - one of favorite chapters happens to be the last which tackles the question, “Do mainline Christian believe in getting saved?” I live in rural Indiana and one major thorn in my side has been people asking me, “Have you been saved?” Besides the fact that it really isn't any of their business, they ask because if you don't give the right answer it gives them an opening to preach to you. I have many times opted for the answer Mark gave us many years ago which is, “Yes, about 2,000 years ago. It was a Friday, the sky turned black...” but of course that is not what they mean. I have been a christian all my life as have most of my friends and relatives. In a nutshell, this chapter makes it clear that salvation can be sudden or gradual and both are valid. You do not have to nail it down to moment in time with a major show of a testimony after an alter call. According to Thielen alter calls were invented in the 1800s out West. Interesting, no?