THE OCEAN AT THE END OF THE LANE – NEIL GAIMAN 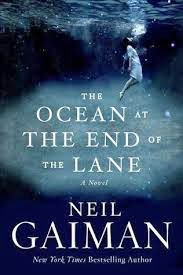 Is anyone else out there “virtually” in love with Neil Gaiman and his voice? I have been for years, actually since 1998 when I read Neverwhere, which I read again the fall of 2000 when one of my book groups read it. Actually I am dying to read it again! He also frequently reads something for October that is online and I could listen to him read all day.

I revisit his work every October because he does those fantastic “All Hollows Read” posters which I am compelled to post on my facebook and often print out for my home because they are so creative. The Ocean at the End of the Lane was our public library in October and once again I was not disappointed. What a lovely mystical modern fairy tale!

In the Sussex English countryside, the nameless narrator recounts his trip back to his childhood home for a funeral. The person whose eulogy he delivers is also not named, but I surmise it is his father's. There is to be a dinner later at his sister's house and as he wanders through the town of his childhood he finds himself drawn to follow the lane down which he had lived as a child to the farm of the mysterious Hempstocks. The year he was seven the mysterious Lettie Hempstock and he had embarked upon a fantastical adventure connected to the pond on their farm, which Hettie claimed was an ocean. The children had encountered an evil being who entered their world and nearly destroyed the boy's family. The story was totally eerie, a bit of “Twilight Zone” where a mysterious nanny ingratiates herself to the adults, particularly to the father, while the children see her evilness and the boy uncovers her diabolical plot. The Hempstocks must come to his rescue.


The memories of the time living down the lane and the creature from the dark are elusive and the boy, as he becomes a man, cannot hold onto them. It is only when he returns to his boyhood home do the wisps of memory return and the urge comes upon him to seek out Hettie. Each time he finds out that he has, on occasion, returned before, but he never remembers once he leaves. It is a short book so I don't want to say too much but I would encourage anyone who likes a good fantasy scare to share this one. It did not escape me that the name Hempstock repeats in Gaiman's works. Last October the same book group read The Graveyard Book and there was a Hempstock in that, and I'm pretty sure there was one in Stardust. I'm in the mood for a bit of stardust, I may go looking for that on my bookshelf again – hope I didn't loan it out!
Posted by Rebecca at 5:10 PM