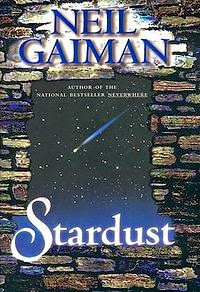 Oh! I saw on Netflix that I could watch Stardust, the BBC production by Gaiman. Therefore, I went searching for my special and most beautiful copy and sat right down and read it. It was every bit as good as the first time... let's see is this only the second, or third time I have read it?

The mythical town of Wall gets its name from the wall that separates the town from the faerie realm. Every nine years the humans from Wall are allowed to visit the faerie market. Dunstan Thorne does so where he meets a princess named Una who is imprisoned by a horrible gypsy/witch. Dunstan purchases a glass snowdrop flower from Una but also meets her in the woods where they make love. Dunstan returns to Wall where he weds his love Daisy and starts a family. However, nine months later a baby is delivered in a basket to Dunstan and Daisy who have a daughter of their own. Daisy and Dunstan love the boy, Tristran and he is raised along with his sister.

Eighteen years later in the faerie kingdom of Stormhold the king is dying. He has several sons and the one who holds the Power of Stormhold, which is an amber amulet is to be the new ruler. The dying king throws his amulet into the sky causing a star to fall from the sky into the land of Faerie. Immediately the sons embark on a quest to find it, and also to kill each other in order to be the one remaining heir. I know that sounds vulgar but the scenes are funny, and once they are dead the brothers continue to follow their surviving brothers around making hysterical comments.

Back in Wall Tristran is courting the most beautiful girl in the town, Victoria, and they see the falling star. Victoria agrees to marry Tristran if he brings her the star, so with his father's blessing and the gift of the glass snowdrop, Tristran evades the Wall guards and slips into Stormhold to search for the star. Also looking for the star are three witches who need to find it to regain their youth (by eating her still-beating heart). However, on earth (or in Faerie Land) a falling star becomes a young woman Yvaine, with a definite agenda of her own. Being taken captive by a young man, having her heart eaten by three hags, or being slain for her amulet do not fit into her plans. A very young Claire Dane is a very nice Yvaine in the movie.


The story is part fairy tale, part fable, a bit Tolkien-ish, and even some Monty Python. I laughed and couldn't stop to eat, or go out, but did have to stop to feed my cats. Loved it. Then.... I watched the movie. I would have to say, had I not just finished the book I would probably have liked it fine. There was no mention of the nine-year allowance of people visits to Faerie Land! That is objectionable to me. There was also a real changing of the end with added encounters of characters who never met and certainly never had knock-down drag out fights, but I guess that is what people like so why not? But, there is a lot of magic which I do like; magic chains, silly elves, hairy men, candles that help you travel as they burn, and a unicorn. Oh also, a love story, a very sweet one. I need a child to watch it with me again, but I need one old enough to which I can read the book first. Volunteers?
Posted by Rebecca at 6:38 PM