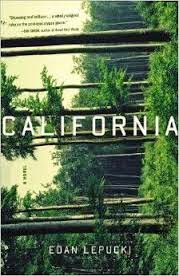 Dystopian novel again for me. I felt shades of 1984, Brave New World, and even The Postman, and yet this had a unique feel. No shocking scenes of apocalypse or war or anything like that. The story begins after the cataclysm is all over, and what had been middle class and poor people are trying to survive by creating new communities, farms, and enclaves. We only see what is going on in California because there is no electronic communication so we the readers have no idea how the rest of the world is faring. There had been some kind of economic failure, the rich have spent years growing their gated communities. They built bigger and more secure walls around their communities, they recruited their own doctors, teachers, and upper echelon thinkers, planners, engineers, and security forces. Everyone else was been kept out, and the rest of the world deteriorated rapidly. Once the exclusive communities stockpiled what they needed and built their own medical, educational, etc. facilities there was little left for everyone else. Most on the outside have either died or moved out of cities to rural areas. There are pirates, armies, and lots of bad guys roaming.

Cal and Frida were middle class, educated, young people. They fled Los Angeles when the old and sick died off, food and medicine became hard to acquire, and living in the city became dangerous. As the book begins they are subsisting in a wooded area outside of Los Angeles. They try to grow their own food and scavenge for other needs. For a while a family of four lives close by and a traveling peddler named August comes occasionally. But after the family dies and Frida becomes pregnant they seek to find other people to live with or near.

Behind a series of frightening and somewhat dangerous constructions, they call spikes, that are laid out in a type of maze, Frida and Cal find a small survival group of about 60 people. The village within the shelter is difficult to figure out, there are secrets, like why are there no children, why does the peddler stay away so long, how do they keep the pirates away, and where does the group get their supplies? The leader, Micah, turns out to be not only a rebel against the rich communities in the time before the collapse, but also the brother Frida thought was dead.

The reader knows things are not as they seem. There is a creepiness about the camp. Everything is regimented and all must work and work hard to keep the camp going. Frida and Cal have a limited time to be accepted and they must be voted in or out, but they have kept the secret of their baby and children are not allowed in the camp. The previous children were sent to one of the neighboring “Communities” to either be adopted or raised as “hatters,” those who do the menial work that rich people and their children do not do. Frida and Cal think they can convince the camp members to accept a baby, but of course things do not go as planned.


This isn't a “can't wait to turn the page” thriller or even a very macabre-feeling story, but it was one with a new twist to how the world falls apart and how it operates after the big crash. As long as you are rich, and other people are willing to get you what you want or need for the minimum you offer them, you are fine in this new world. But simmering on the outside are those not happy and what are they planning? Personally I found the end wrapping up too fast and where Frida and Cal end up seems to come too easily. But that does leave it open for a sequel.
Posted by Rebecca at 1:29 PM