ONE THOUSAND WHITE WOMEN: THE JOURNALS OF MAY DODD – Jim Fergus 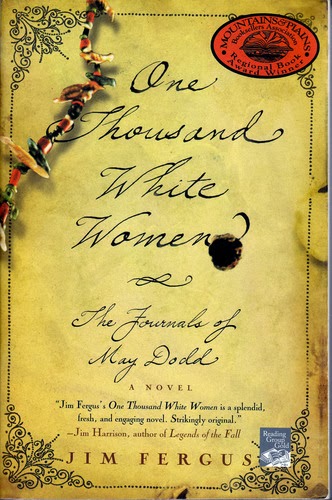 One of my book groups was scheduled to read this so I scrounged used book stores until I found a copy, a bit battered but in one piece. Truthfully I prefer hard copies but then I feel a burning desire to keep it, so I try to decide if a book is truly “shelfworthy.” If a book is worthy of keeping in my small house then I will go for the hard. Sure that this would be one to pass along I opted soft. I enjoyed it, it isn't a “classic” or of great quality, some of it seems a bit cliché, and perhaps the portrayal of the Cheyenne isn't very accurate. That being said I still liked it.

If the notes are to be believed the premise of the book is based on a real event. Apparently in 1854 at a national peace conference a noted Indian chief requested 1000 white women be sent West as brides in exchange for horses. The reasoning was that procreating with white women would be the impetus for assimilating the Indian nation into the white man's society. Of course this did not go well and indeed the women were never sent. Enter Jim Fergus to write a “what if” story of just such an endeavor. It is moved forward in time about twenty years and written in the form of a journal of one such woman sent to be a “savage bride.”

As you can imagine it was quite difficult to find 1000 willing women to go, so the prisons and insane asylums were culled for volunteers. Forty women are assembled. May Dodd had been put in an insane asylum by her wealthy family for having a “perverse personality” disorder. Which means she has been living with a man to whom she is not married and had children out of wedlock. The ability to leave the asylum, she thinks, may be her ticket to a new life and a future opportunity to perhaps be able to find her children. While on the way West May has a short but torrid affair with John Bourke, an army captain. He tries to get May to scrap her plans but he also cannot marry her because he is already betrothed, and besides she is not an acceptable bride for an officer.

As the traveling and the journalling progresses the reader gets to know the core group of women quite well and a motley crew they are. Among them are a gay environmentalist, a black Amazon ex-slave, an evangelical Bible-thumper, a terrified mute, feisty Irish twins, a Swedish farm girl, and a racist Southern belle. May steps up as a pillar of strength, an understanding influence, and a wise leader among the women. When she becomes the wife of an important chief she adapts to native life and helps her fellow wives assimilate into the tribe. Of course knowing any history of the time and place the reader knows things cannot end well. There are problems of course with communication and the clash not only of cultures but of strong personalities. The Natives are at war with invading white people but also with each other. There is brutality and hardship as well as love and dawning understanding between unlike minds. When the powers that be in Washington decide to take over the very land where the tribes of the women have been located, the army, including Bourke shows up. Heartbreak.


The segue to the present in my opinion works well and closes the story nicely. Whether or not the description of Cheyenne life is accurate, I enjoyed the adventure, the strange characters, and even the love stories. If you can't appreciate history re-imagined it isn't for you, but if you like the fantastic “what ifs” of a good tale told then you may want to try this one. Overall our book group liked it and we had a good discussion. I have already passed it along to a good friend. Hope she likes it.
Posted by Rebecca at 8:07 PM