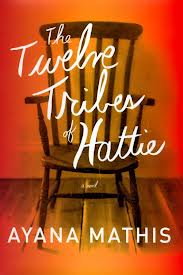 Again I am reading a book made up of inter-locking or inter-connected stories put together to create a novel. This one follows a strikingly beautiful woman who has fled from the Jim Crow rules of Georgia to Philadelphia in the early 1920s. Hattie marries handsome young August Shepherd and starts a family. When her first babies sicken and die Hattie is propelled into a depression and sadness from which she will never be totally free. We follow Hattie through nine more children and her battles to raise them all and keep the family whole. She scrapes, and claws from their poverty all the best she can for their essentials. But in the mean time Hattie gives the children little of herself and no tenderness or loving touches which they crave. August is a product of his time and while he loves Hattie and adores all the children still he lives by a masculine code of male dominance, working, smoking, drinking, gambling, and womanizing.

The book is not constructed linearly. There are significant time jumps both forward and backward, and each chapter is a vignette of a family member at a significant event or turning point. Floyd, the oldest boy struggles with his homosexuality while following his art in the music industry. Six turns to religion and becomes a child evangelist while struggling with his inner demons of anger and violence. Billups falls into mental illness after being sexually molested and Alice, the drugged wife of a wealthy lawyer, tries to be his caretaker forever because she feels responsible. Cassie becomes a severe schizophrenic, leaving Hattie to care for her child, Sala. Franklin gambles and drinks and goes to the war in Vietnam. Beautiful Bell is self destructive. Ruthie who doesn't belong to August but is a product of an affair that Hattie has with the gambler Lawrence. When the final child Ella comes there is nothing left for Hattie to give and so Ella goes to live with Hattie's well to do sister back in Georgia.

Hattie dreams of being free; free from August, free from the poverty, free from all the children. But when she has a shot at freedom she passes it up. I suspect she really didn't want to be freed. Perhaps? I read some pretty harsh reviews of this book. People saying it is unfinished, disjointed and such. Possibly, but also possible is that it is meant to be this way so the reader is forced to ponder, to think, to muse about what it all means. Open-ended is not a bad thing.


This book is beautifully written and I will be thinking about these people for a long time. (Yes I know they aren't real.) I often wish for a magic wand that I could wave and make things better and so I wished for a magic wand for Hattie. Deep down she loved her children but never learned to show it. She did the best she knew how. At the end August has settled and Hattie is 71 raising a small grandchild. Hopefully for Sala things will be better. I would read this one again.
Posted by Rebecca at 3:58 PM