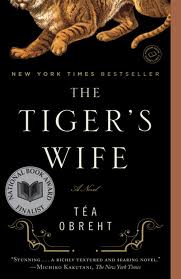 A dark and wonderful story by Obreht who gives us truth transformed into allegory and history via mythology. If the setting is a current country I didn't catch it but I think it must be in the area that used to be Yugoslavia during the unrest in the 1990s. Natalia, a young doctor, has grown up with her grandparents and her mother and adores her grandfather above all. He himself had been a respected doctor.

When she was a child, it was her grandfather's habit and maybe he felt his responsibility to take Natalia to the zoo once a week, show her wonders of the world around them, read to her from his copy of The Jungle Book, and tell her tales. As she grew he also told her stories of his many meetings with the one he called “The Deathless Man” (Gavran Gaile) who claimed to be immortal and appeared to never age. Who could not love a man who tells wondrous tales and carries a copy of Kipling in his pocket?

When Natalia is grown and a doctor herself, she and a friend go on a charitable mission to inoculate orphans. While there Natalia encounters more superstition and secrets and strange people who dig for bones in a vineyard in the middle of the night. In the mean time Natalia is also desperately trying to make sense of her grandfather's suspicious death under unusual circumstances. Being a physician himself he must have know he was near death. He told his wife he was going to meet Natalia, and yet he traveled to an unknown place to die alone. When Natalia retrieves her grandfather's belongings the Kipling that he always carried is not there and indeed it seems to have vanished.

Trying to piece together some meaning, Natalia reexamines the many stories her grandfather told her. Then she uncovers a story called The Tiger's Wife which is about her grandfather's childhood in a small village. One winter during WW II the village was snowbound, cut off from Nazi invaders, but terrorized by an escaped zoo tiger. In searching through the story she realizes her grandfather, as a small boy, shot and killed a man and kept it a secret all of his life. Natalia compares her childhood stories, her experiences, and The Tiger's Wife, and begins to make connections. Magical realism is what we are looking at here I believe.


Great writing, fascinating plot and I recommend it.
Posted by Rebecca at 6:03 PM