THE FAULT IN OUR STARS – John Green 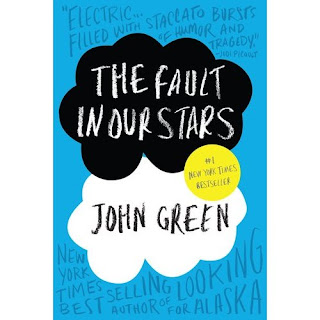 “Sometimes, you read a book and it fills you with this weird evangelical zeal, and you become convinced that the shattered world will never be put back together until all living humans read the book. And then there are books… which you can’t tell people about, books so special and rare and yours that advertising your affection feels like a betrayal.”—Hazel, from The Fault in Our Stars

Is the above (from page 33) not the best book quote ever? My second favorite quote is used many time in TFIOS and is, “The world is not a wish-granting factory.”

I've meant for some time to read a John Green book because he gets such good reviews and he has several books on the New York Times best seller list. Also, he has great short instructive videos on Mental Floss a favorite web magazine to which I subscribe. Therefore, I purchased a copy of The Fault in Our Stars yesterday to read while waiting on a vehicle repair. After staying up until after 2 a.m. and then doing the “leave me alone I'm very busy” routine with my family this morning I, and my box of tissues, completed my quest. (deep sigh) Loved it.

You will need tissue. How Mr. Green has so successfully written about terminal illness is something I ponder but also fear I don't want to know the answer. Of course I myself have not ministered to a dying person who was not older, and have not lost any children, so I cannot say 100% that his portrayal of terminally ill people and their families is totally accurate. All I can say is that the reviews are positive and the story feels real. Even though you will need tissues don't fear the maudlin or over dramatic here. While there is sorrow there is happiness, wit, wisdom, creativity, sarcasm, and the joys to be had of following characters you care about and who are very much like people you know or are. This novel is so well crafted that the reader feels relief upon finding that dying people don't want you to be crying for them all the time, they just want to be happy and get the same things from life that everyone else gets.

Of course you know going in that both main characters are dying. They meet in a support group for terminally ill teens. It is also clear that this is not a fantasy and there will be no life-saving wonder drugs or superheros whisking off the dying. Hazel is 16 and has been fighting death since her terminal diagnosis of thyroid cancer when she was 13. She meets and falls in love with Augustus, 17 who has had one leg amputated because of cancer. They are both smart, good students, and well-read. Their repartee and loving banter while hysterical to them is sometimes annoying to others but is so fun for the reader. Hazel and Gus bond in several ways but one major interest for them is a book. A fiction book called An Imperial Affliction has meant so much to Hazel that the teens go on a quest to meet the author. The meeting goes not at all as the characters nor the reader expect and is quite shocking actually.

Many of my friends will not read this book and they will say they don't wish to read "sad." They want to escape and be entertained. Well you will be entertained, but you will also be educated, and perhaps you might exercise your ability to appreciate irony and sarcasm a little?
Posted by Rebecca at 7:13 PM