A VISIT FROM THE GOON SQUAD – Jennifer Egan 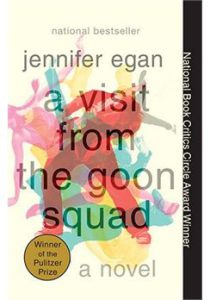 A novel in vignettes, and if you like a book that bings you around the lives of the characters like you are riding a pin ball then this is for you. A little unsettling sometimes maybe, but a really creative ride it is. Egan toggles the reader around between 1970 and sometime in the not too distant future after 2020, and through a myriad of protagonists. Their lives are all connected and do come together in the end so there is that to keep in mind. Perhaps we are doing one of those “six degrees of separation” things here? I am not familiar with Egan but I found whole chapters that were so intense and characterization so colorful that leaving them to romp off with another while many years passed left me somewhat irritated. It would be possible for me to go back and reread for instance all the “Sasha” chapters and be happy. All the characters come and go over the years and seem to bang around and into each other over and over.

The rocketing around from character to character and back and forth between four or five decades takes 13 chapters but only 288 pages so you know it goes fast. At first I thought this piece could never hang together but it did and I liked it. Before I read it I saw a reference to A Visit From the Goon Squad as a “mash-up.” Possibly that is a good description but it is more than that too. If you are, as I am, in your “middle age” you may be called upon to remember the 70s and 80s and try not to judge the characters too harshly. There is sadness, irritation, but also humor, irony, and sarcasm written here with skill.
Posted by Rebecca at 5:51 PM