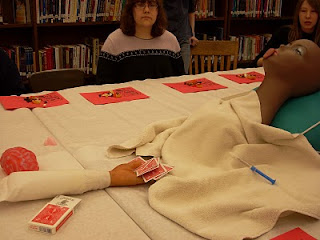 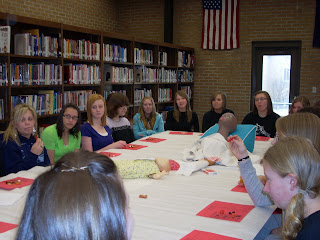 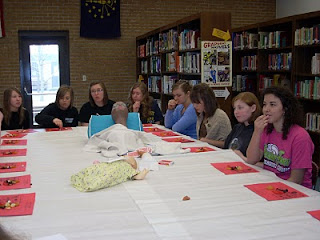 In March our whole Student Literati group met to discuss Unwind by Shusterman. (See below on this blog for notes on our first discussion and a summary.) This time we made discussion like a book party. We decorated with items pertinent to the story including a toy brain to represent CyFi, a towel draped mannequin head and other fake body parts to represent Roland and the unwinding process, an arm with playing cards to represent the truck driver, and a "storked" baby. My library intern made place mats containing a discussion guide and a representation of the UK book cover that she found on the Internet which she liked better than our USA version.  She also put a sign on the library door welcoming the students to Happy Jack's Harvest Camp.

Each Literati member received their own official "Unwind Order" taped to their locker earlier in the week which served as their reminder to attend discussion. A baby doll was passed about in the hall and between sponsors offices as a "storked" child. Specific students presented at group with round band aids in their palms to represent "Clappers."

My students are so amazing and not afraid in the least to discuss the issues and the parallels. They talked about the values of the characters, the Heartland War (basically between right-to-life and choice), the resulting treaty protecting all life, organ transplants, and the ethics of requiring sacrifice so others can have quality of life. They also talked about the struggles of the characters deciding when life begins and what it means to a culture to have over-population issues. Discussion moved to parallels between events in the book and history such as the Underground Railroad and Sonia's Unwind Underground, Martin Luther King and Conner's work, and unwinding centers versus organ transplants.

Of my 32 Literati kids only one said she did not like this book. She did not elaborate as to why. Apparently a lot of kids in Indiana liked this book as it was voted the Eliot Rosewater winner for this school year. My students (who did vote by the way) are not surprised. I love my kids.
Posted by Rebecca at 9:09 AM