HOTEL ON THE CORNER OF BITTER AND SWEET – Jamie Ford 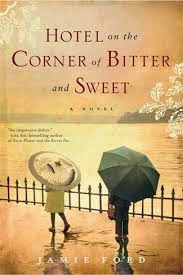 “What his son, Marty, never fully understood was that deep down there was an Ethel-shaped hole in Henry's life, and without her, all he felt was the draft of loneliness, cold and sharp, the years slipping away like blood from a wound that never heals.” (sigh) That quotation on page four portended a book to feed my soul. It is about his son not understanding how Henry feels at the loss of his much beloved wife, Ethel.

Occasionally such a book finds its way into your life. One with sentence structure and characterization to take your breath away. This is one for me. After reading it for the second time, it still holds that same “food for my heart and soul” as it did at our first encounter.

I also get to give away 20 brand new copies of this title on April 23, 2014 as a "giver" for World Book Night and my prayer is that those copies will find souls to nourish as it did mine. The book binding is artistically satisfying. A mix of butterscotch, vanilla, and green colors combined with a depiction of children by the sea in the mist (Henry Lee and Keiko Okabe) are enough to elicit feelings of anticipation for a great read.

Hotel is so well written as to make the reader actually feel what it must have been like to witness the nightmare of the rounding up for internment of Japanese-Americans during WW II. Families were torn apart, losing all their belongings, their homes, jobs, being persecuted by their own country that they were loyal to and mostly in which they were born. The people watching the nightmare transpire were equally emotional, some feeling confusion, helplessness, and broken-heartedness, but others with glee, hatred, and feelings of superiority.

But this book is not really about the internment. It is a multiple love story and one of finding oneself after major life altering events. In Seattle, Washington second generation Chinese-American Henry Lee lives in Chinatown while his best friend Keiko lives in Japantown. The Chinese and Japanese of Seattle are at odds already because back in China a war still rages between the countries, animosity seeping into the American subcultures. WW II is raging and public sentiment toward people of Japanese origin is quickly getting bitter and violent. Henry and Keiko both have earned scholarships to go to a white school where they work together in the cafeteria. She is a third generation American-Japanese girl. Her grandfather immigrated long ago and both her parents and Keiko were born in Washington and speak no Japanese. Henry and Keiko become best friends, spending many hours and days together haunting Jazz clubs listening outside to the music, spending time with Henry's jazz-playing friend, Sheldon, and haunting record stores looking for a rare record.

When the US military trucks show up with weapon-bearing soldiers to round up all the Japanese-Americans and herd them onto trains a chilling scene follows as Henry tries frantically to find his friend, and to understand why this is happening. Of course looters take over the Japanese neighborhoods immediately and it all happens so fast. It made me feel physically sick reading about it. We can only hope that we will not soon be repeating that in America, but today I see much of the same resentments being openly shown to our Muslim-Americans and it seems eerily similar.

After 40+ years pass The Panama Hotel is sold to a young woman who plans to restore it to its full prewar glory. In the basement she finds a cache of stored mementos and valuables belonging to the families that were sent away in 1942. Those families had thought they would be returning soon, which they never did. Henry recognizes Keiko's parasol.

On page 7 - “The more Henry thought about the shabby old knickknacks, the forgotten treasures, the more he wondered if his own broken heart might be found in there, hidden among the unclaimed possessions of another time. Boarded up in the basement of a condemned hotel. Lost, but never forgotten.” Thus Henry, with the help of his son and his dying best friend, embarks on a mission.

I hope I didn't make this book sound maudlin. It isn't at all, and I learned so much about the times in places like Seattle where large numbers of Japanese and Chinese descendants lived together yet very much apart. There is a whole sub-story about Henry trying to find his place as an American while dealing with the old traditions and prejudices of his father, and much irony in history that we can only see in retrospect, such as Mr. Okabe, an American born lawyer, being first persecuted, interned, then sent with the Japanese division of the Army to Europe to fight the Germans. Another favorite line of mine is on page 265 when Henry's father dies and he realizes he has too many obligations and therefore cannot wait for Keiko, his love, to return. He will help his mother in his father's place, go to China to finish his education, marry a nice “Chinese” girl, cover up his sadness and, “...do what he always did, find the sweet among the bitter.”


I'm sure your public library had this book for you to read and if it doesn't ask them to buy it. I will be read and I am glad to have read it twice!

** Footnote: my mother passed away a few days after I finished this entry and I did not get to hand out my free copies. However, my two friends Beth and Wendy did it for me. They passed out 20 copies of The Hotel on the Corner of Bitter and Sweet in Dunkirk Indiana and I pray at least some of those books brightened some lives as it did mine.
Posted by Rebecca at 8:02 AM