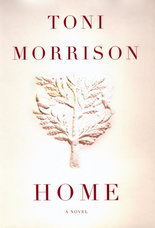 No one tells a story like Toni Morrison. While not reading all of her books, I have read many and loved them all, some more that others. She can write heart-wrenching and mind shattering scenes exquisitely beautifully. Home a novella of 147 pages is no exception and if you read it you will be thinking about Frank and Cece for many days after.

The book begins with two small black children witnessing an unspeakable act perpetrated by white men in the nineteen twenties. In 1951, 24 year old Frank Money is an emotionally broken, out of money, out of luck, homeless, and loveless, returned Korean War veteran. Wandering the streets of Seattle he wrestles with the violence raging inside of himself. He fights, gambles, loses all his money, his girlfriend, and his home. He has avoided going home to Georgia because he is the lone survivor of the homeboys who went away to war, and he cannot face the bereaved families or the sister he feels he abandoned when he left. But when he gets a message that his sister, Cece is in great need and may be dying he has to go home. Finding herself abused and abandoned Cece has taken a live-in job for a doctor. The doctor, however is experimenting with eugenics and Cece becomes his victim. Frank retrieves her from the doctor's but it is the women of home who perform the miracle and return Cece to the living with their folk cures, food, and love. Frank and Cece eventually end up in the same field under the same tree where years before they witnessed a murder.

Of course Morrison cannot have a story without ghosts or visions and so we have a phantom man in a zoot suit dancing on the edges of the story and flashbacks to war horrors in Korea and the death of a child. The book is rich in language and content. The theme of the lost man, finding his worth, his home, and his manhood intertwined with that of racism in the 1900s works and works well in Home.

Knowing I would love this book, and thus wishing to have a good copy to place in my library, I acquired a nice hard copy from AbeBooks online. It is a lovely hardcopy with a thick dust cover in white having a raised illustration of a tree on the front. (sigh) I would love a reason to read it again. Wait... do I need a reason?