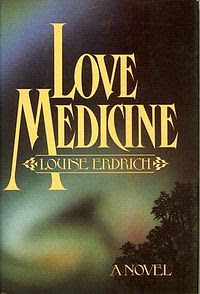 The local public library chose this Native American title for May and I for one was looking forward to discussion. Having read it long ago, my old 1993 copy was still on the bookshelf but frustratingly, bringing much of the plot into my tired brain was not to be. Therefore it was like reading it for the first time. So many characters were introduced immediately in the format of short stories not in any kind of chronological order that I soon got lost and confused. Consulting the Internet, I retrieved a family tree of the characters and then made myself a notecard with a few notes on relevant connections and events. After that I was fine and enjoyed this lovely book again. The reprinted versions have the tree and other notes included that would have helped me. Oh well.

The book jumps around the years between 1934 to 1984 involving two families on a reservation in North Dakota. Each chapter is narrated by a character in either first or third person and is presented to the reader as a story. What was great about this is that the reader is in each chapter narrator's head and sees an event unfold, but then in another chapter that same scene will play out from a different perspective.The thread that ties all the stories together is in the character of June Morressey who in the first chapter walks out into a snow storm and freezes to death. She has a close tie to all the other narrator/characters and thus her story unfolds from the time she was a small orphan going to live with her aunt, through her troubled years married to her cousin, past her divorce, and into a life of illicit sex and alcohol abuse. June was admired and loved so the people she leaves behind are haunted by her passing.

There is so much to appreciate in Love Medicine. The triangular love story between Marie and Nectar Kashpaw and Lulu Lamartine is thought provoking, colorful, and wonderfully funny at times. Native American values, beliefs, and their fight against the government are all put into perspective and made real. The importance of extended family, raising children with a lot of love, and strong matriarchs are all prevalent themes in Erdrich's work. All of the characters are wonderfully rounded out, complicated humans, and interesting. Marie is probably the best and most detailed character. After her failed attempt at becoming a nun she spends her life loving her alcohol-haunted husband and taking in orphaned and unwanted children. I certainly will never forget the evil nun who tried to ruin Marie's life and never felt remorse or humility even on her deathbed! Lulu is the most colorful person in this book. Beautiful, sharp-witted, but hopelessly in love with Nectar since childhood, she has eight sons all by different fathers.


My favorite chapter is “Love Medicine (1982)” narrated by Lipsha in which he helps his grandmother administer the love medicine to his grandfather, but also in which he asks his grandfather why he shouts in church. Grandfather says it is because that is the only way God can hear him and Lipsha realizes that God indeed is becoming deaf to the plight of American Indians. This book does not romanticize the Indian culture nor disparage it. We get a brief look at complicated lives in an unfamiliar culture exceptionally presented. What more could we ask?
Posted by Rebecca at 5:02 PM