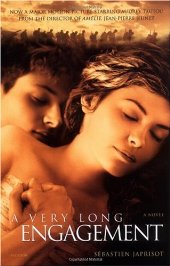 Haunting, magical, scary, heart-wrenching, difficult at times... What else should I say in preface to telling you I loved this book? A nice hard copy for my personal library would be in order. That being said I am not sure I have a friend to recommend it to because it starts so difficultly. I myself may not have stuck with it if it had not been a book club choice - and I am very much against being in a club if you aren't prepared to make yourself read all of the selections. However, after re-starting at least twice, it was very much worth it.

How could you not fall in love with a book that begins thus:

“Once upon a time, there were five French soldiers who had gone off to war, because that's the way of the world.

The first soldier, who in his youth had been a cheerful, adventurous lad, wore around his neck an identification tag marked 2124, the number assigned to him at a recruiting office in the department of Seine. On his feet were boots taken from a dead German, boots that sank into the mud of trench after trench as he plodded through the godforsaken maze leading to the front lines.”

The engagement was long indeed. Ten years (1917-1927) spans the time wheel-chair bound beautiful Mathilde searches for her lost fiance, Manech. The book begins with five French soldiers of WW I being sent to the front in lieu of execution for shooting themselves in attempts to get out of the fighting. They are put out into the space between the French and German lines knowing it is unlikely that they will survive. Before they are sent out they are each allowed to dictate a letter home. The next day when the French advance they do indeed find five bodies. From there the reader is spun into multiple webs of stories surrounding the five men and their respective wives and lovers. The women receiving the letters were told by the military that their husbands and lovers were killed in the line of duty. Some of the letters contained coded messages. Some of the women try to find out exactly what happened, how their men died, and Mathilde is one of these. Over the ten years she investigates and puts many pieces together to try to find out what really happened.

The characters who cross Mathilde's path and those who's lives intertwine the other women are so colorful it was a joy to travel a bit with each of them. I think I love Mathilde because she is dedicated to truth, always, no matter what (as I tend to be) and it helps that she has many cats whom she loves. She also is an artist and dotes on her parents and care givers as they do her. Her quest begins in earnest when she reconnoiters with a dying Sergeant Esperanza who tells her what he knows and gives her copies of all the mens letters and a picture of the five men. It is after reading all the letters and making notes of what Esperanza told her that she begins to believe in earnest that Manech is not dead.

The quest with Mathilde is what keeps you reading, there is sadness and disappointment but there is beauty and fun also. There is an avenging prostitute, a colorful detective, and a supposedly dead motorcycle riding soldier who cannot stop riding for long, a grieving godmother, to name only a few of the great characters. I need to read this book again.
Posted by Rebecca at 7:04 PM