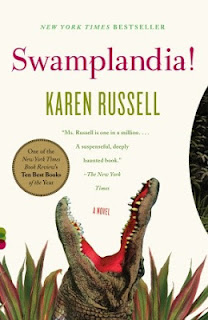 I must confess a bit of trouble starting this one and I kept hoping it would move faster until achieving the halfway point when suddenly I had to finish it. Two different book clubs I attend have discussed this title recently forcing me to think about the writing, characters, and plot in more detail thus adding to my appreciation.

In the Everglades of Florida lives the unusual Bigtree family. They own and operate an amusement park featuring alligator wrestlers. To say the least the life of this family is not conventional. They are messy, eccentric, very unusual, and happy. When the featured wrestler and matriarch Hilola dies of cancer, the oldest sibling, Kiwi runs away, and Dad leaves his two girls, Ava who is thirteen and Osceloa who is 16, alone for a few weeks in an effort to acquire some funds to keep the park afloat. Troubles multiply, danger lurks in the swamp, Dad doesn't come home.

The heart of the book is about the sisters Ava and Osceola alone in Swamplandia but there are rich and meaty chapters about Kiwi. The seventeen year old has taken a job at a rival park, The World of Darkness, based on the Book of Revelation from the Bible and Dante's Inferno. He wants desperately to be able to make enough to send home finances and also to go to college. Kiwi is my favorite character. His home-schooled education has not prepared him to navigate a world he little understands. Thankfully he is very bright and also acquires friends who help him.

Back in Swamplandia Ava struggles to take care of the park and alligators. When a government abandoned dredge drifts close by Osceola concocts fantasies of a ghost lover and one day disappears into the swamp to be with him. Soon an unusual stranger called the Birdman appears and offers to help Ava find her lost sister in the under world. The two embark on a surreal and dark journey. The writer's style is particularly engaging in these chapters. One wonders while reading what is real and what is fantasy and if the Birdman is a good character or not. These chapters contain a bit of swamp history too about the Melaleuca project in Florida of the late 1800s, dredging of the Everglades, and the killing of the Seminole people.

It was enjoyable to live with this quirky family for a bit. Visiting the grandfather in his nursing home comprised of docked houseboats was surprising and shocking as well. I found myself well able to see their house, the gator wrestling arena, and to visualize the museum. It was disappointing to not have more of a story for the Red Seth though.

A creative piece, not at all what I expected but worth the read. I found it artful, fantastical, gothic, and often funny. The book began with a quote from Through the Looking Glass and I did feel like I was down the rabbit hole while immersed in Swamplandia.
Posted by Rebecca at 5:06 PM