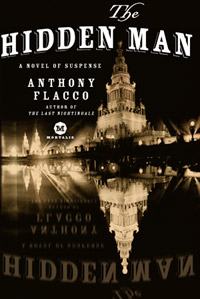 If you are pining for something to make your skin crawl this is a book for you. I picked this up at The Strand in NYC on my last trip there in 2008. Why it got shuffled to the bottom of my “to read” pile I have no idea, but since it has been gloomy and windy I was in the mood for a tale noir. This didn't disappoint.

I remember picking it out of a basement bin at The Strand and being intrigued by the beautiful cover art which is a photo of lighted buildings at the 1915 Panama-Pacific International Exhibit in San Francisco. What is so great about the cover art besides the beauty of the scene is the way the title and author's name seem to be reflected also. Another thing that interested me was the author profile in the back. There I read that he is a screen writer. This book actually read a bit like a movie – chapters occurring simultaneously or seconds, minutes, or hours apart.

The city is busy rebuilding on the rubble of the great earthquake a decade before, and preparing for the world's fair. A famous mesmerist is struggling to keep his act going while spiraling into a drugged world of his own where he battles the onset of Alzheimer's. Detective Randall Blackburn deals with unethical dealings within the police department while teaming with his son to solve a murder which hasn't happened yet. A nondescript man, who is actually a demented killer, stalks victims (and Blackburn's fiance) in broad daylight. Many people see him yet he goes unnoticed. Blackburn's daughter keeps the plot hopping too with her efforts to be an individual in her own right as an independent woman in this stuffy 1915 upper crust society.

A lot of action, intrigue, and yes a lot of blood and guts. Actually quite well written and nice short 275 page afternoon read. My only complaint? Typos! Argh!
Posted by Rebecca at 4:58 PM